Did you know that I also teach on kink-related topics?  I provide private instruction to individuals, couples and small groups. Check out some of my offerings on Chicago Dungeon Rental’s website.

May 2016 I’m currently reading The Piercing Bible: The Definitive Guide to Safe Body Piercing by Elayne Angel. While this is not a how-to book, it is filled with useful information for anyone considering getting a piercing. On more than one occasion people that I have played with have expressed an interest in getting a piercing as a symbol of submission. I fully endorse the sentiment and find it much more appealing than having something symbolic tattooed upon a submissive to signify ownership. There’s something very erotic and powerful about piercings. This is probably why I am drawn to engaging in temporary play piercing in scene.* It’s a fascinating read that would recommend even if you never plan on getting a piercing.

*Are you interested in experiencing play piercing or learning how to safely explore this with your partner?  Come and see me for private instruction!

February 2016 I attended the first ever RopeCraft conference in Austin, TX. 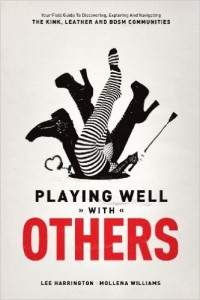 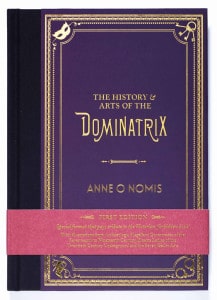 March 2015 I attended the Kinky Kollege conference in Chicago for the eigth time.

October 2014 I attended the Kinky Kollege conference in Chicago for the seventh time.

May 2014 I attended DomCon Los Angeles. It was a whirlwind of activities but I managed to make time to attend a few classes. I especially liked Shit My Dom Says: How to Talk Like a Dom by Danarama.

March 2014 I attended the Kinky Kollege conference in Chicago for sixth time.

October 2013 I attended the Kinky Kollege conference in Chicago for the fifth time. The highlight of the weekend was a plastic wrap suspension workshop with Simon Blaise. I attended the same class in 2012 and was instantly smitten with the beauty, versatility and eroticism of plastic wrap suspension. I tried my hand at it as well and found that this type of bondage and suspension technique came very naturally to me; I’ve enjoyed incorporating it into my sessions as well as into my playtime with friends.

April 2013 I attended the Kinky Kollege conference in Chicago for the fourth time. There were three workshops I particularly enjoyed this time around:

October 2012 I attended the Kinky Kollege conference in Chicago for the third time enjoying a variety of classes and some play time with friends.

July 2012 I attended fetish diva Midori’s illuminating ForteFemme weekend in San Francisco with a select group of amazing women, one of whom wrote an article for the Huffington Post about our time together.

January 2012 I owe a thank you to my favorite AB (adult baby), Peter Bunny Rabbit, for sending me a copy of Miss Penny Barber’s book The Age Play and Diaper Fetish Handbook: the Ultimate Guide to the World of AB/DL! I highly recommend this book to anyone curious about the wo

rld of infantalism, regression and diaper fetishism. It also has some very helpful instructions on cloth diaper folding and cleaning, making pacifier gags and packing the perfect AB diaper bag.

June 2011 One of the first books I enjoyed on my new Kindle was the S&M classic Venus In Furs by Leopold Von Sacher-Masoch.

February 2011 Thanks to my curious nature, but mostly to generous holiday and birthday gift-givers, I have a stack of books almost as tall as my favorite knee high stiletto boots.  Everything from HTML programming (for my new website) and expert cross dressing to advanced male genitorture and slave training protocol. Now I just need to make enough time to read them all!!

December 2010 I was fortunate enough to snag a spot in Midori‘s sold-out workshop on Military and Interrogation Scenes at Chicago’s Galleria Domain II.  I also attended her hands on rope class on body harnesses when she visited Early to Bed but that’s one thing I still need some practice on!

October 2010  I attended Kinky Kollege in Chicago. It was a fantastic weekend long conference with dozens of workshops, speakers and SM-related events!  Some of my favorite workshops were Predicament Bondage, Interrogation Scenes with Hardy Haberman, and Enemas presented by Loki.

August 2010  Re/search People Series: Vol One, Bob Flanagan Super Masochist –  This isn’t the 1997 award winning documentary, Sick: The Life & Death of Bob Flanagan Supermasochist.  It’s actually a 126pg book that consists of seven lengthy interviews done with Flanagan conducted by Andrea Juno & V, Vale in 1993. In addition to those interviews are numerous photos of Bob, his life with his partner Sheree, plenty of BDSM activities, photographs of his performance art and more.   If you can get your hands on a copy of this book I HIGHLY recommend doing so.  It’s not available on amazon.com but if you scroll for a while on the link above you’ll find it.  Bob’s outlook as a terminally ill individual living his SM lifestyle to its fullest is articulated in such a way that not only reminded me to appreciate life but also how therapeutic SM can be.  Rest in peace Bob.

Whip Smart by Melissa Febos – I’ll spare you my lengthy critique.  In a nutshell, her writing is beautiful but she treats SM and professional domination like a joke and alternately ridicules and pities her clients.  Because of that I am not linking this to Amazon.com – I’d hate to increase her sales.  If you’re curious, listen (for free) to a radio interview that Terry Gross did with her on Fresh Air. Or better yet, listen to the interview she did on The Masocast podcast in September 2010. 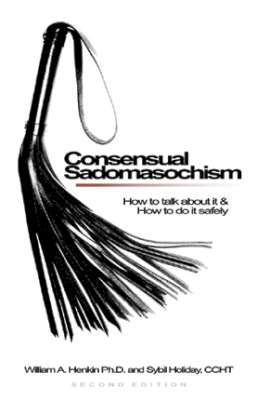 April 2010 Consensual Sadomasochism: how to talk about it & how to do it safely by William A. Henkin Ph.D. and Sybil Holiday, CCHT

December 2009 I’m currently reading Family Jewels: a guide to male genital play and tormentby Hardy Haberman (with an introduction by one of my favorite kinksters, fetish diva Midori) and loving every page.  My lucky personal sub will get some new treatments as a result before I bring any of my new ideas to session.  Isn’t he a lucky boy?

This site uses cookies. By continuing to browse the site, you are agreeing to our use of cookies.

We may request cookies to be set on your device. We use cookies to let us know when you visit our websites, how you interact with us, to enrich your user experience, and to customize your relationship with our website.

Click on the different category headings to find out more. You can also change some of your preferences. Note that blocking some types of cookies may impact your experience on our websites and the services we are able to offer.

These cookies are strictly necessary to provide you with services available through our website and to use some of its features.

Because these cookies are strictly necessary to deliver the website, refuseing them will have impact how our site functions. You always can block or delete cookies by changing your browser settings and force blocking all cookies on this website. But this will always prompt you to accept/refuse cookies when revisiting our site.

We fully respect if you want to refuse cookies but to avoid asking you again and again kindly allow us to store a cookie for that. You are free to opt out any time or opt in for other cookies to get a better experience. If you refuse cookies we will remove all set cookies in our domain.

We provide you with a list of stored cookies on your computer in our domain so you can check what we stored. Due to security reasons we are not able to show or modify cookies from other domains. You can check these in your browser security settings.

These cookies collect information that is used either in aggregate form to help us understand how our website is being used or how effective our marketing campaigns are, or to help us customize our website and application for you in order to enhance your experience.

If you do not want that we track your visit to our site you can disable tracking in your browser here:

We also use different external services like Google Webfonts, Google Maps, and external Video providers. Since these providers may collect personal data like your IP address we allow you to block them here. Please be aware that this might heavily reduce the functionality and appearance of our site. Changes will take effect once you reload the page.

The following cookies are also needed - You can choose if you want to allow them: